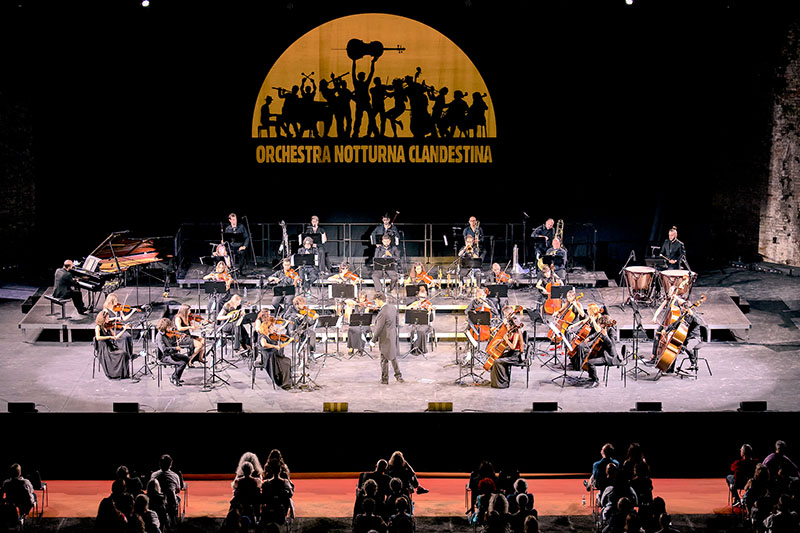 The Orchestra Notturna Clandestina is an independent symphony orchestra, founded by Enrico Melozzi in 2016, with the aim of transmitting the universal values of classical music to as many people as possible, paying particular attention to young people and less affluent audiences.

Formed by musicians convinced that the objectives of classical music are absolutely popular, while the reality of the facts gives us a classical music enjoyed almost exclusively by an elite audience, thus denying the purpose that the same classical authors proposed themselves at the time of the composition of their masterpieces.

The Orchestra Notturna Clandestina, whose name takes its cue from the Teatro Clandestino of Kantor (Polish playwright who decided to found this sort of theater during Nazism, which prohibited free cultural manifestations), has recorded for major labels such as DECCA (alongside Giovanni Sollima, godfather and co-founder of the orchestra), and has been invited to participate in prestigious festivals such as Riccardo Muti's Ravenna Festival, the D'Annunziano Festival, the Puccini Festival in Torre del Lago, the "Musica a Palazzo Venezia" Festival in Rome, the Concerts of the Quirinale at the Cappella Paolina broadcast live on Radio3, the Macerata Opera Festival at the Sferisterio, and many others, thus becoming one of the reference points of national classical music.

In the summer of 2020 it's the protagonist on RAI5 of a documentary produced by RAI CULTURA, entitled "Sinfonie di Rinascita" in which it appears alongside famous orchestras and historical institutions of the national and international scene (Orchestra Filarmonica di Santa Cecilia, Orchestra Cherubini, Orchestra del Teatro dell'Opera), in a focus on music after the lockdown and the importance of culture in a difficult period like the one we are living today.

In order to finance its activity, since 2017 ONC has been organizing legendary "Rave Clandestini di Musica Classica", in which thousands of people flock to enjoy more than 18 hours of live classical music, in an informal environment but at the same time of impeccable artistic quality, making use of the collaboration of RadioRai3.

The group consists of about 55 elements, the vast majority of which is composed of young musicians under 20 and under 30, flanked by major professionals in the city of Rome, and boasts an important multi-ethnic vein, as there are young musicians from various parts of the world who have chosen Rome as the city to develop their profession (Brazil, Argentina, Iran, Russia, Spain, Poland, Puerto Rico, Colombia, Argentina).

It is useless to dwell on the importance that this multi-ethnicity has in the search for a totally new sound, which in fact manages to get straight to the hearts of the public (which grows month after month), the highest and most refined music of the classical repertoire, creating a sort of cultural community composed by musicians and listeners, in constant development and exponential growth.

In May 2021, in total contrast with the rest of the world, the orchestra expands with the foundation of a second Orchestra Notturna Clandestina based in Milan, composed of musicians who gravitate to the Milanese hinterland, who share the same founding principles of the Roman group, becoming in fact the first widespread orchestra in Italy.

Members of Orchestra at the festival "La Notte della Taranta" 2021